Disinformation on social media has been a growing concern in global politics for several years, and it is now exploding across Sub-Saharan Africa, where social media-based disinformation campaigns are increasingly being deployed by foreign entities and governments  to influence narratives.

Several socio-political and economic factors provide fertile ground for disinformation to thrive in African countries. The exploding youth population – with many coming online for the first time through social media – growth in the use and availability of internet-enabled mobile phones, ethno-religious conflicts, and insecurity are some of the factors that have contributed to the large amount of information accessible via digital media and provided new, fast-moving channels for spreading and amplifying false information.

This growth in disinformation in the region has presented a new stress test for emerging internet policy and legislative responses. For instance, in March 2020, Ethiopia enacted the Hate Speech and Disinformation Prevention and Suppression Proclamation to address hate speech and disinformation, which have historically troubled the country. However, it has been argued that whereas government regulation is legitimate to control hate speech, Ethiopia’s new law poses a threat to freedom of expression and access to information online.

In Cameroon, under the Law Relating to Cyber Security and Cyber Criminality, it is an offense to publish and propagate information online “without being able to attest its veracity” or truthfulness. In a July 2020 press conference, Cameroon’s Communication Minister, René Emmanuel Sadi, expressed concerns over “irresponsible” use of social media to tarnish the image of public officials or sabotage government actions and warned that those who continued to propagate such information on social media platforms would face the heavy arm of the law.

Other countries like Zimbabwe and Tanzania have broader media laws that have been used to target fake news. The various laws have been criticised for posing a threat to digital rights, especially when deployed as tools against critical opinion, the media, and dissent in African countries with democratic deficits.

Many African countries, including Cameroon and the Democratic Republic of Congo (DR Congo), continue to grapple with disinformation, with a high risk of online activity resulting in offline harm. This report reviews the situation in these countries, where – despite relatively low connectivity levels – disinformation presents a considerable concern.

Citizens in Cameroon and the DR Congo rely on a wide range of traditional sources of information (including print and broadcast media), alongside online sources to keep abreast of social, economic and political issues. However, social media has come to play an increasing role on issues related to conflict because mainstream media is censored by their governments.

In Cameroon, tensions between Anglophone and Francophone regions date back to the country’s independence in 1961. Over the years, there have been fatal violence and protest action against the continued “francophonisation” and marginalisation of English speakers who say that the central government privileges the majority French-speaking population.

In 2015, a video showing two women and two children being shot dead by soldiers in the Far North town of Zelevet started to circulate on social media. According to a July 2018 BBC Africa Eye investigation, the government initially dismissed the video as fake news. However, Amnesty International revealed credible evidence that the Cameroon military was responsible, prompting the authorities to retract and state that the 10 soldiers depicted in the video had been arrested and would be prosecuted. Five years after the incident, a military court convicted and sentenced the soldiers to imprisonment.

Whereas the BBC Africa Eye investigation into the shooting incident revealed that several people did not like to spread hate speech and graphic violence content online, sometimes they recognised that such content could include safety information, especially for those who live in conflict areas. 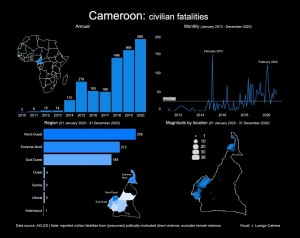 In the DR Congo, a history of armed conflict has left millions dead and the country destabilised, with continued violence perpetrated by several armed groups active in the region, including the Allied Democratic Forces (ADF), the Democratic Forces for the Liberation of Rwanda (FDLR), and numerous militias. The United Nations Organization Stabilization Mission in the DR Congo (MONUSCO) has operated in the region since 1999 and is the largest UN peacekeeping mission in the world.

During the 2018 elections that had been long awaited, there were reports of widespread election irregularities, with competing political parties claiming to be in the lead as several unofficial tallies started to circulate on social media. Sponsored content from Google and Facebook falsely alleged that former President Joseph Kabila’s surrogate, Emmanuel Ramazani Shadary, had won the elections. The ads were published before the official results announcement by the Electoral Commission, which had been delayed. There were internet shutdowns in key cities, which made it even harder for fact checkers to verify any information related to the elections. 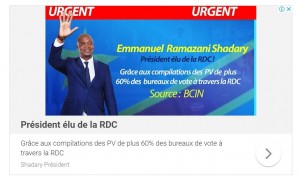 Considering the elections had been postponed from November 2016 to December 2017, and then to April 2018, the circulation of false election results could have prolonged the cycle of instability.

Role of the Diaspora Community

The diaspora community is a huge contributor to the inflaming of tensions online in both countries, often through fake accounts that regularly share hateful and inciting content against rival political factions.

During the 2018 elections in Cameroon, there were several instances of social media posts from the diaspora claiming that long-serving President Paul Biya had died. Biya went on to win the disputed elections, and two years on, social media content, often from the diaspora, continues to fuel political and ethnic tensions. 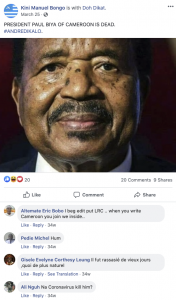 With the conflict in Anglophone regions leading to calls for a break-away state and separatists actively seeking support from the Cameroonian diaspora, there is an ongoing risk that online content that depicts the Cameroonian government as repressive and violent could result in offline harm. 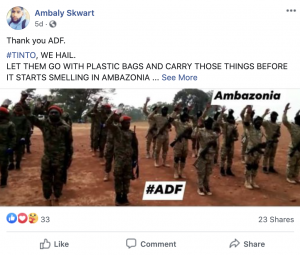 As for the social media posts falsely claiming that Shadary had won the 2018 presidential election in DR Congo, considering the internet disruption at the time, indications are that the perpetrators of the sponsored ads and admins of the accounts in question were based in the diaspora. Lumumba aime LE CONGO (Lumumba loves Congo), which was among the key propagators of the ads, had been created just before the elections and traded on the likeness of Patrice Lumumba, a famous independence leader. Besides content claiming victory for Shadary, the page also shared posts from several fake domains or news aggregation websites like CongoActu24.com. This was another example in which disinformation had the potential to lead to offline harms within a fragile political environment. 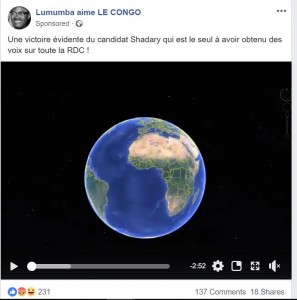 Like in other African countries, Cameroon and DR Congo have seen a surge in Covid-19 disinformation online, some of it pegged on cultural, political and religious sensitivities including promotion of herbal remedies, steaming, alcohol, contradictory and speculative reports about treatments and/or confusing guidance about standard operating procedures (SOPs).

The spread of disinformation around diseases can be a public health risk, as has been the case in Cameroon and the DR Congo regarding Ebola and, more recently, Covid-19. Disease disinformation undermines confidence in underlying science, slows down sensitisation, politicises health activities and questions the motives of health officials.

DR Congo is no novice to pandemics, having borne the brunt of the Ebola outbreak between 2017 and  2019. In May 2020, France 24 News reported a Covid-19 fake news campaign in DR Congo. The France 24 reports were later corroborated by Facebook and DFRLab, which linked the network to a politician called Honore Mvula. The network carried several Covid-19 false claims attributed to public figures including French infectious disease expert Didier Raoult, French president Emmanuel Macron and Madagascar president Andry Rajoelina and these made rounds on Congolese Facebook pages, recording a high rate of engagement. Mvula denied the allegations against him. Facebook took down the pages. 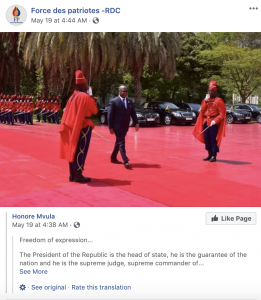 Cameroon and DR Congo have a history of ordering internet disruptions on multiple occasions during public protests and elections. In January 2017, internet connectivity was restricted in the Anglophone region of Cameroon following dissent and calls for succession from the Francophone region. The disruption, which lasted for over 230 days until March 2018 is recorded as the longest internet shutdown on the continent.

Similarly, in the DR Congo, instability in the country has been continuously characterised by persistent internet shutdowns since December 2011. Following a relatively peaceful voting day on December 30, 2018, the government shut down the internet on December 31 and progressively, broadcast  media, and expelled some international journalists reporting on the elections. The official reasons provided by policymakers were “to avoid fake results from circulating”. 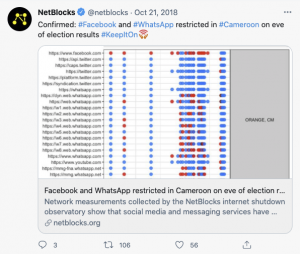 Internet shutdowns during elections are a common and growing trend of digital repression especially in authoritarian countries in Africa, whose leaders have been in power for many years. When governments impose information blackouts or curtail the free flow of information online through other means, disinformation thrives as fact-checking and the production of counter-narratives are hampered. In the case of Cameroon and DR Congo, that disinformation, much of it originating from the diaspora, propagates hate speech and disinformation that threaten to exacerbate civil strife and undermine electoral integrity. In turn, the shutdowns and the disinformation propagated by state and non-state actors, are eroding technology’s potential to enhance electoral integrity, to civic engagement and the fight against diseases such as Covid-19. 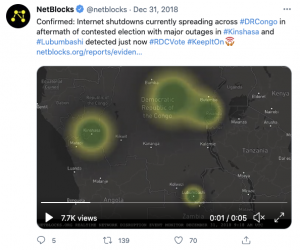 Accounts of targeted messaging during elections have become common, and they are particularly concerning as the content of the messages is often misleading, out-rightly false, or inciting. This recent rise of online campaigning through social media platforms has thus raised further concerns about how the required data is obtained, the extent to which African democracies are vulnerable to foreign interference, the ways in which social media algorithms are prone to manipulation, and the ethics of using African countries as a testing ground for new digital technologies.

Whereas efforts to legislate against disinformation are human rights pressure points, alternative countermeasures, in collaboration with social media platform operators, hold some promise. In 2020, several sub Saharan African governments partnered with social media platforms and other intermediaries to fight Covid-19 disinformation. Earlier in 2018, Cameroon directly engaged with Facebook to explore opportunities for fighting the spread of false and misleading information within the country. Meanwhile, promoting digital literacy skills and fact checking capacity, and creating awareness about what is unacceptable content on platforms and how to report objectionable content, remain key needed actions. Hence efforts and other measures to combat disinformation and other harmful content, including around elections and in the fight against Covid-19, require closer collaboration between governments, civil society and platforms than we have witnessed this far.

Richard Ngamita is a Data Researcher who currently works on human rights, disinformation and espionage. He previously worked at Google with the Spam team. He has also led investigative research across health, agriculture and refugee movements.

© 2020 All rights reserved​ | Dr Thomas Molony | The University of Edinburgh